Meet Cindy Adong, a Wedding Planner and the Founder of Splendor, an event planning company in Uganda.

We spoke to Cindy about her journey growing her business during a pandemic and the lessons she has learned along the way.

how she got started. 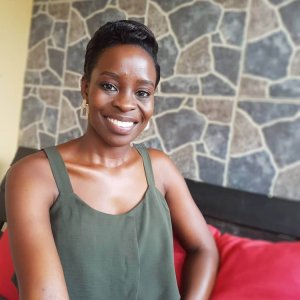 Cindy describes the work she does in a few words: she solves problems.

She takes away the stress that comes with event planning by making the entire process as smooth as possible, both in the lead up to the event and on the day itself.

In July 2015, she left her job with Spedag Interfreight, a logistics company. She had worked with them for close to three years prior to this, working in administration, procurement and customer relations. As she notes, managing the day-to-day of a busy logistics company is a lot of pressure and a high stakes game.

“It teaches you to be sharp because it’s one of those businesses where time is literally money,” Cindy said, “This was training ground for me as I ventured into the events management space.”

Cindy finally decided to pursue an idea that had been brewing inside of her for years – wedding planning!

“It reached a point where that was all I could think about. The thought of NOT doing it was terrifying! What if I died without doing it!?”

But, starting wasn’t as easy as she thought it would be.

She initially got involved with weddings by using a skill she had always had – doing makeup.

However, she wanted to plan weddings, not to do makeup alone.

As she continued piecing this idea together, she spoke to a gentleman who was running a décor and wedding planning business.  She wanted to seek advice on how to get into the market.

“When I spoke to him, he discouraged me from going down this path, especially if I didn’t have start-up capital to offer a complementary service that would get me into the market. Otherwise, in his opinion, Ugandans wouldn’t appreciate the services of a wedding planner alone.”

she was discouraged by this.

While she understood that he was saying her dream wouldn’t work, she also knew it was a case of timing.

Surely the market would eventually warm up to the services of a wedding planner.  (Spoiler Alert: they did!)

In the meantime, she had to figure out how else to make a living while still being involved in the events space.

“I did a bit of décor and continued offering makeup as a service to bridal teams – something I still do to date. But I always knew planning was where my heart was and every time there was an opportunity to do it, I would.”

She planned her sister’s wedding, and actively helped friends plan theirs. She also planned a number of concerts and conferences at the church she goes to.

Eventually, she she got a paid opportunity with SHONA – a Business Development Service (BDS) provider – to organize the many programs and workshops they frequently run. This was exciting because it assured her of a stable income, something that was rare in business.

but then COVID-19 happened

Events were no longer possible.  The industry seemed like a temporary dead end.

“Like everyone else, I was stuck at home with my thoughts. Splendor was put on indefinite hold,” Cindy said, “At the beginning, I stayed thankful for what I had, avoided the news and exercised a lot.”

However, Cindy noticed that she attached a lot of her personal value to her work. She started feeling worthless in society when she wasn’t able to do what she was good at.

“As the lockdown progressed, I started to feel like I had wasted the bulk of my time. I didn’t have anything tangible to show for much of the year. I was lost and disappointed in myself and eventually started slipping into a form of depression.”

To get out of this slump, she had the idea to advertise as a wedding planner, something she wouldn’t previously have done. At this time, the restrictions in Kampala were beginning to be lifted and more weddings were happening.

“I made a simple poster with my face and wrote up what I thought the services should be. At that point, I knew I had nothing to lose.”

Then she got a client!

With a wedding to plan, she was brought back to life and slowly came out of the depression she was slipping into.

As a small business that was still taking off, 2020 was difficult.

Cindy had to recite affirmations in order to remind herself that even though she wasn’t working, she was not worthless.

Cindy also learned that she is her own biggest advocate and cheerleader. It doesn’t matter if people believed she could do something or not, what mattered was what she believed of herself.

“I need myself so much. I really learned the importance of being kind to myself because I am the driver of this thing. If I slip, it slips.”

This experience taught her how important it is to protect your mind in order to stay sane and she appreciates the value of self-talk. She believes she can do difficult things because she has repeatedly told herself that she can.

be tenacious and persistent

Throughout 2020, there was a lot of despair in the service industry.  And it was all uncontrollable.

Cindy’s biggest lesson and advice is to calm down.

It’s hard to think about solutions to the problem when operating from a place of fear, anxiety or panic.

what’s next for Splendor?

“I want to raise the standards in the service providing space and for excellence to become common place. I know this starts with myself. The way I meet clients and handle them.”

Cindy wants providers to know that when they are contracted by Splendor, they will be expected to work at a certain standard.

She plans on growing the caliber of events she does. She doesn’t want to only execute, but wants to conceptualize the different ways events could run.

And she would also like to run some international events – Hello Kenya!

Importantly, she wants to build a team of like-minded, competent and passionate individuals to build this amazing business with.

How has your business changed since the start of the pandemic?  What decisions have you made, that you may have never considered otherwise?  Share with us in the comments below.