Frustration, resistance, and tears – these are some unfortunately common realities on the startup journey.

Do you have great intentions but sometimes lack the motivation to get started?  Do you feel a bit scared at times?

Then you’re likely to relate to my latest startup confession…

For three years I’ve been training with Amanda Kelly at KO Gym in Bethnal Green.

Amanda is a two-time world Muay Thai champion fighter who has recently crossed over into the world of Mixed Martial Arts (MMA), a multidisciplinary fighting form.

MMA is a great physical and mental challenge.  Although I love our sessions and know that the payoff is worth the effort, some days I’ll drag my feet the entire way to the gym.  Some days I’m tired and a bit demotivated.  Some days I won’t meet my own expectations.  And some days I’ll feel really frustrated at far I push myself without any noticeable improvements in time, speed, or agility.

There’s a lot more in common than you might think.  Here are four things that MMA has taught me about business.

Does focusing on an end goal start to feel a bit scary sometimes?  Do you wonder how you’re ever going to get there?  Does the uncertainty of what’s next stop you from taking the first step? 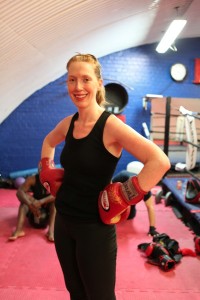 Three times a week, I know that I’m walking into a tough 90 minute workout.  That might include jumping on top of a 2 foot box 50 times in a row, doing a grueling 10 minute circuit 3 times, or running back and forth 250 times with strength exercises along the way.

If I start each session fearing all of the things that are about to come, not only would I only be focused on the banana at the end but I’d also be miserable the entire time!

Instead I choose to focus on the moment.

I become grateful for the strength in my legs and arms that hold me up, the breath of air that restores my oxygen levels, or that 1 minute rest between circuits.  I acknowledge how my body is feeling at that time.  I make adjustments when something hurts.

But I don’t give up.

When we’re too blinkered on how far we have left to go, we can lose site of any accomplishments along the way.  Take a moment and appreciate what’s in front of you at this very second.  The one client, the one contract, the one ‘thank you’.

Running a business is tough and not everyone is cut out for it.

There are going to be really extreme lows.  You won’t often hear about them because it’s embarrassing to tell others when it’s not going so well.  So you’ll start to think you’re alone.  You’ll feel like you’re the only one finding it tough.  You’ll feel like a failure.

But here’s the truth…you’re not.  It’s really fucking hard sometimes and I won’t pretend that it’s not.

Just like there are days when I don’t want to drag myself to the gym because I know it’s going to be hard, there are going to be days that you want to close up shop and stay in bed because it hurts when people aren’t taking an interest in your business.

On these days, remind yourself of your motivation for being in business and the outcome you’re hoping to achieve.  Recognise how far you’ve come already.  Know that the feeling will pass and tomorrow is a new day.

3. surround yourself with a strong team

Who can you talk to about the challenges that you’ve had today?  Who can you moan to when it’s moving slower than you’d like it to be?  Who can you celebrate with when someone says yes?

Amanda would tell you that it’s not just about the work that she puts in but it’s about the team she has around her.  She’s had over 30 fights with the KO team – a team who support her through all aspects of her training regime and provide that much-needed encouragement when things are tough.  She couldn’t do it on her own, no matter how great of a fighter she is.

It’s the same in business.

You need a support network around you to both challenge and encourage you.

4. sometimes you’ll get punched in the face

On Friday, Amanda was trying to trip me up during a drill and I was so frustrated with her.  Why couldn’t she go easy on me?  And then I thought of the alternative.  If she did go easy on me, how would I learn?  How would I improve my block?  How could I avoid being punched in the face next time?

Recall a recent setback in your business.  How can you grow and become stronger from it?

What’s one way that you can become more mindful in your business?  Share with us in the comments below.