Wednesday, 10PM.  The taxi had just dropped me off from the airport after 3 days working in Warsaw.

My kitty, who had seemed to be doing okay for the ripe age of 15, had stopped eating the day prior.  Although I thought we’d have at least a few more months together, it was immediately clear that our time together was nearly up.

To say that the days which followed where tough is an understatement. 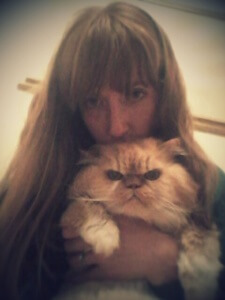 He wasn’t just any old kitty.  We’d been together since I was 19 and he was 4 months old.  In many ways we grew up together.  He outlasted a number of friendships and countless relationships.  For every new city I moved to (and country!), he was the one constant.

But sadly, shortly after 5PM on Friday, we had to say goodbye.

Sometimes we make mistakes.  Sometimes we wish things had turned out differently.  But without our experiences and our mistakes, none of us would be the people we are today.

As I think back at my own time on this planet so far, I wouldn’t change anything.

My 10 years in a corporate role gave me the skills, business acumen and cash that I’ve needed to start my own business.  Although it ultimately wasn’t the right place for me, I learned a lot about being strategic and now help my clients build up those skills for themselves.

Leaving that behind without a clue of what I wanted to do instead was the best thing I could have ever done.  It pushed me to embrace change, to try out things I hadn’t considered and experiment.  During that process, I became more resilient.  More confident in what I stood for.  More certain of what I would and would not compromise on.

Starting my own business has been one of the greatest things I’ve done so far.  Sure there are times that have been tough.  REALLY TOUGH!  I’ve had to make things up and modify as I go.  I’ve had to pivot when I learned that what I thought I wanted to offer wasn’t what my customers really wanted.  I’ve learned to not take things personally.  To adapt.  To grow.

And because of that, I get to choose who I work with.  I get to say no to opportunities that don’t fit with my principles.  I get to help so many people day in an day out.  I get to experience gratitude.

Today I encourage you to do that thing you’ve always wanted to do.  Take that leap that you’ve been holding back from.  Make that apology that’s been on your mind for awhile.  Cross that thing off your to do list that you’re never really going to do but keep on their for the sake of maybe changing your mind one day.

Whatever it is, do one thing today that satisfies you.

Your time is now.  Don’t let it pass you by.

Share your own wisdom with us.  What have you experienced which has really helped you become the person you are today?  Leave a comment below and let us know.